Bravery at our Post of Honor: A Mother’s Day Message

Dear members of the university community,

Where there is a brave [person] in the thickest of the fight, there is the post of honor. Henry David Thoreau

Since this pandemic is a place where we have never been before, we are grappling with so many issues that require more information and clarity than we have. Should we or shouldn’t we shelter in place? Which is worse, a spreading virus that kills or a lifeless economy that kills? Which country offers the U.S. a best practice model that is realistic in terms of fighting the virus long-term? Which scenario of change is most likely? Will there be a resurgence of cases and deaths in the fall of 2020? What are the immediate steps that we must take to do something to combat the spread of the virus?

South Florida is at this moment ground zero for confirmed cases and deaths statewide. Miami-Dade County accounts for nearly 35% of cases in Florida — Palm Beach and Broward counties account for nearly 23% of all confirmed cases. You can find all the general data about our state at Florida’s COVID-19 Data and Surveillance Dashboard.

While the data gives us an indication of what is happening, and in the midst of the uncertainty about what’s ahead and how to get there, our community has put up nearly two dozen test sites around the county so that eligible residents can find out if they have the virus. FIU, Miami-Dade County, the Miami Dade County Fair & Exposition, and the Florida Department of Health run a testing site on the northeastern edge of the Fair. There, 300 eligible residents a day are tested in a drive through procession for the COVID-19 infection. This site is a proverbial ground zero for COVID. We have tested more than 8,000 individuals since April 8, 2020. About 6-7% have tested positive.

Appointments to get tested are made the day before the test — it is provided by health sector volunteers seven days a week, including today — Mother’s Day. Our site is one of the few open on this special day — a manifestation of the FIU mind-set, our commitment to our community, and the service-ethos of the professionals and student volunteers providing the test. The fact that we are open today reflects our “I see I want — I grind I get” motivational logic that usually accompanies the doers in our community who refuse to sit on the sidelines. That’s us. That’s this testing site. Let me share more with you about it!

FIU professionals and staff have dedicated thousands of hours to the development and operation of the test site. While there is little consensus around the big questions (and others posed at the beginning of this narrative), there is little debate about the need for and the value of testing, especially at the community and individual level, where the virus is ravaging household after household, family after family. 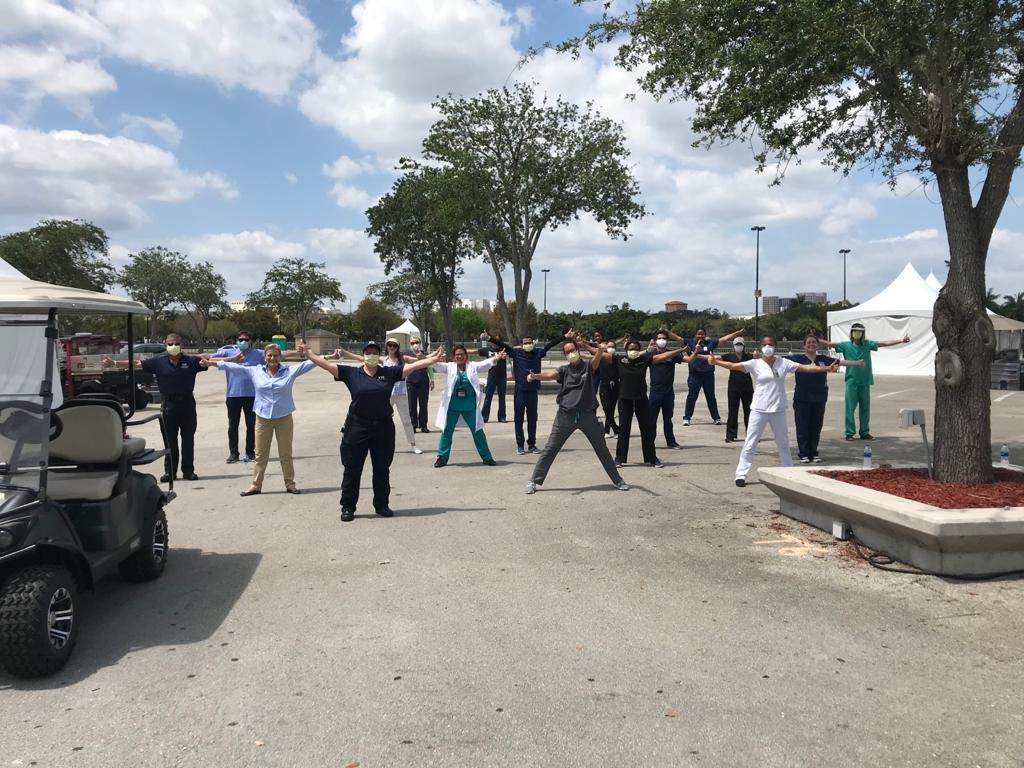 However, what is taken for granted in the given wisdom about the virtue of testing relates to who exactly will do the testing, the risk involved, and how will individuals be notified of their results?

Echoing Justice Oliver Wendell Holmes to President Franklin Roosevelt, who sought the judge’s advice upon his first inauguration as president, we are “marshalling our battalions and fighting” to help stop the virus in its tracks.

The actual location of the test site, the Fair, had just about opened for the annual three-week carnival of rides, concerts and fun when it was closed on March 12 due to COVID-19. Fair CEO & President Eddie Cora (whose daughter is an FIU graduate and son is an FIU Junior) immediately set about to prepare for what he knew was coming.

According to the affable leader, “the fairgrounds have always been a location where the community could come for shelter and relief during times of emergencies. We thought it was important that the fairgrounds once again be used as this pandemic began to ramp up,” Cora said.

The Fair is providing its expertise in logistics, moving people and infrastructure; meanwhile, the test site is managed and operated by the FIU Division of Operations and Safety and health professionals and students from the Herbert Wertheim College of Medicine, the Nicole Wertheim College of Nursing & Health Sciences, and the Robert Stempel College of Public Health & Social Work. They are all brave souls, because this is essentially a high-risk voluntary assignment. 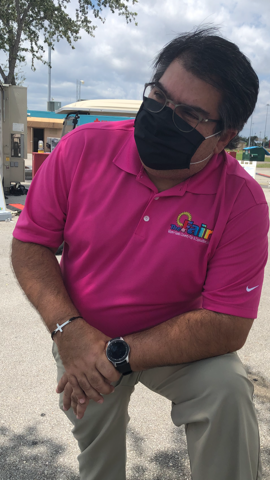 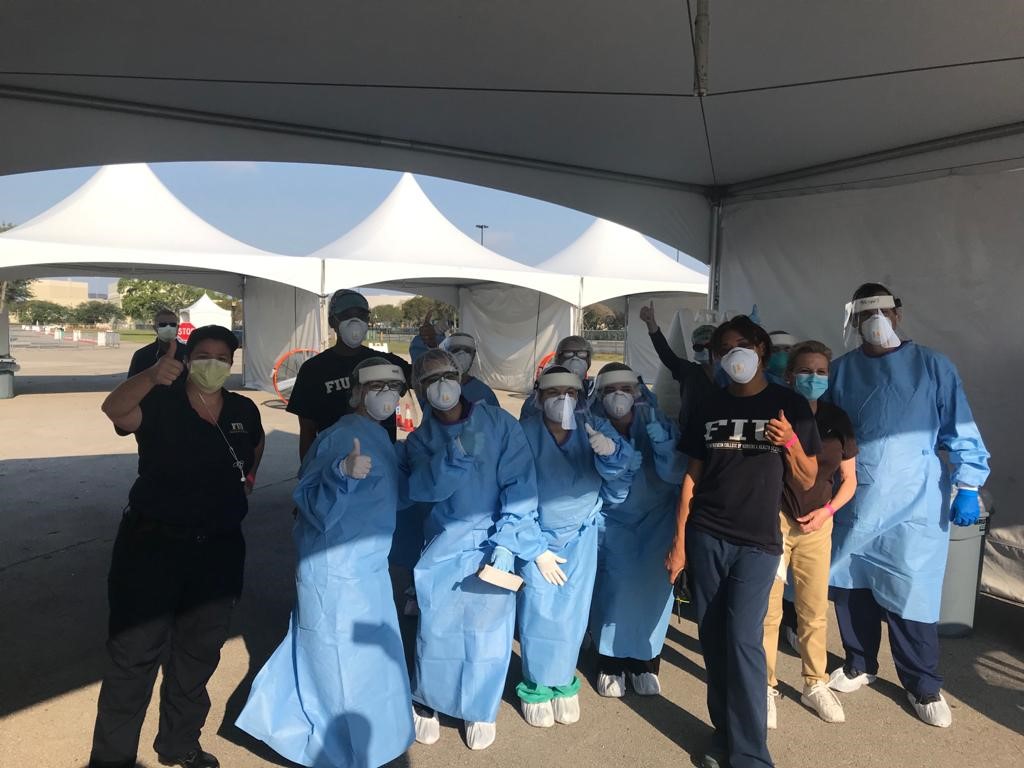 Our test site is run on a daily basis by about 60-70 professionals. FIU’s Bridget Pelaez and Pete Gomez are the incident commanders. Both are seasoned disaster management professionals. You met Bridget in an earlier briefing about our Four Horsewomen of the Apocalypse. Pete, a former Assistant Fire Chief with the City of Miami, is a compassionate leader who is ultimately responsible for everything that takes place on site. This means ensuring the safety of everyone on site – including patients who drive through for testing – maintaining adequate inventory of needed supplies for both testing and administrative functions and keeping accountability of expenditures.

“They have all been exceptional in performance and their dedication to assuring the success of the site,” he said.

But what’s most remarkable about the site, Gomez said, is the connection established with individuals in the community during a very challenging time. He shared a particularly tough moment when the wife of a police officer who had just died from COVID-19 had to be tested.

“Seeing the look on her face through the mask she was wearing was heart breaking. This poor woman just lost her husband and now was panicking about her and her daughter’s welfare,” Gomez recalled (P.S. — the woman tested negative).

And there they have been — rain or shine — providing the tests that so many need to get some peace of mind or out of self-imposed quarantine. Take Dr. Rosa Roche, who has spent her days at the test site’s “hot zone” – or the swabbing station – as part of a team of medical doctors, EMT/paramedics, physicians assistants and nurse practitioners. The drill consisted of two teams of three, all suited up with personal protective equipment at the start of every day.

Roche says she clearly remembers her first day at the swabbing station.

“We were put into teams and then decided who would be the swabber, the assistant, the bagger and the scriber,” she said. “Since this was all new to us, I have to admit that I was a little apprehensive and afraid because there were so many in healthcare becoming infected.” 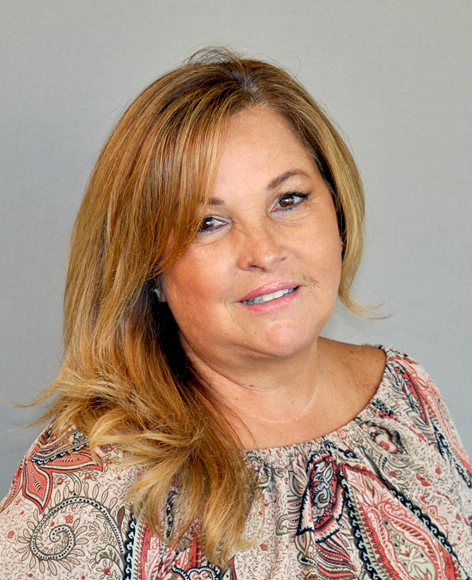 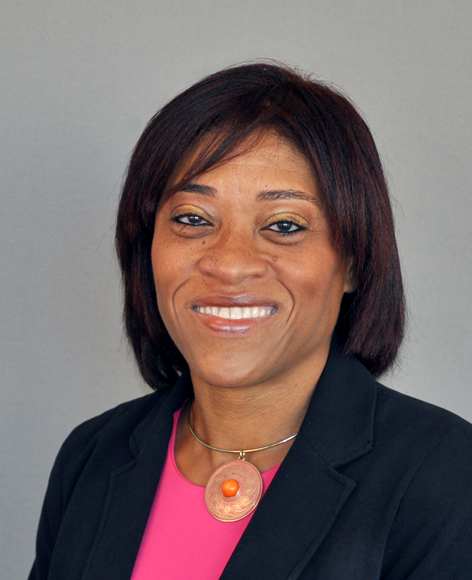 But eventually, the team got the hang of it.

“It was a very rewarding experience all around, to be able to work alongside my students and other professionals to help serve the community,” she added.

Doing the tests is one thing. Sending them off (to Virginia), and then three to five days later advising those who were tested of their test status, is another.  Apparently, many test sites just take the sample swabs, then leave it to the laboratory to notify or not the client. We, on the other hand, insisted on “patient” follow-through by at least being able to advise that the test proved negative. Thus, we set up a call center in what was once the FIJI Fraternity House to advise each patient that their test came back negative. (The overall test manager — CDR McGuire — makes all calls to those who test positive.) 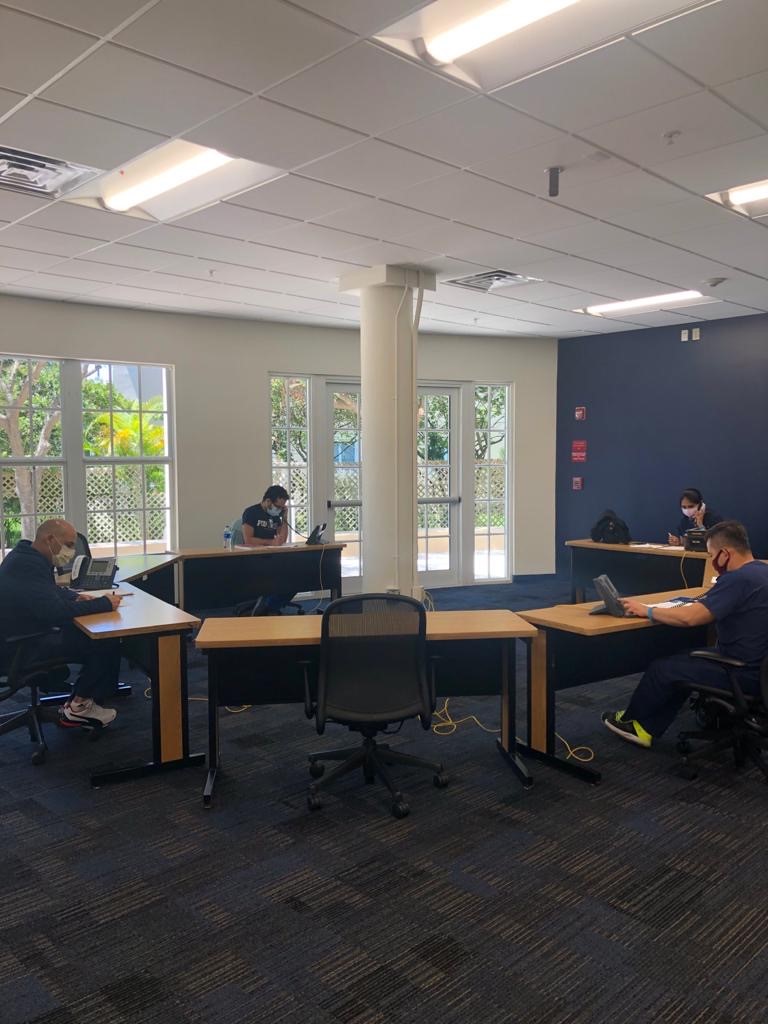 This FIU call center is managed by a two-time Nursing graduate of FIU — Dr. Vanessa Gordon, who calls herself a “clinician at heart.” She is proud of the fact that the call center made 559 calls to patients to give them the good news on Friday, May 8, 2020. A passionate-for-life Panther, Dr. Gordon appreciates the “team effort” of the test site and likes to inform our patients with the good news that their test came back negative. Fully staffed, the call center has nine people — seven Nursing students, two faculty from the College of HWCOM and two from the NWCNHS. 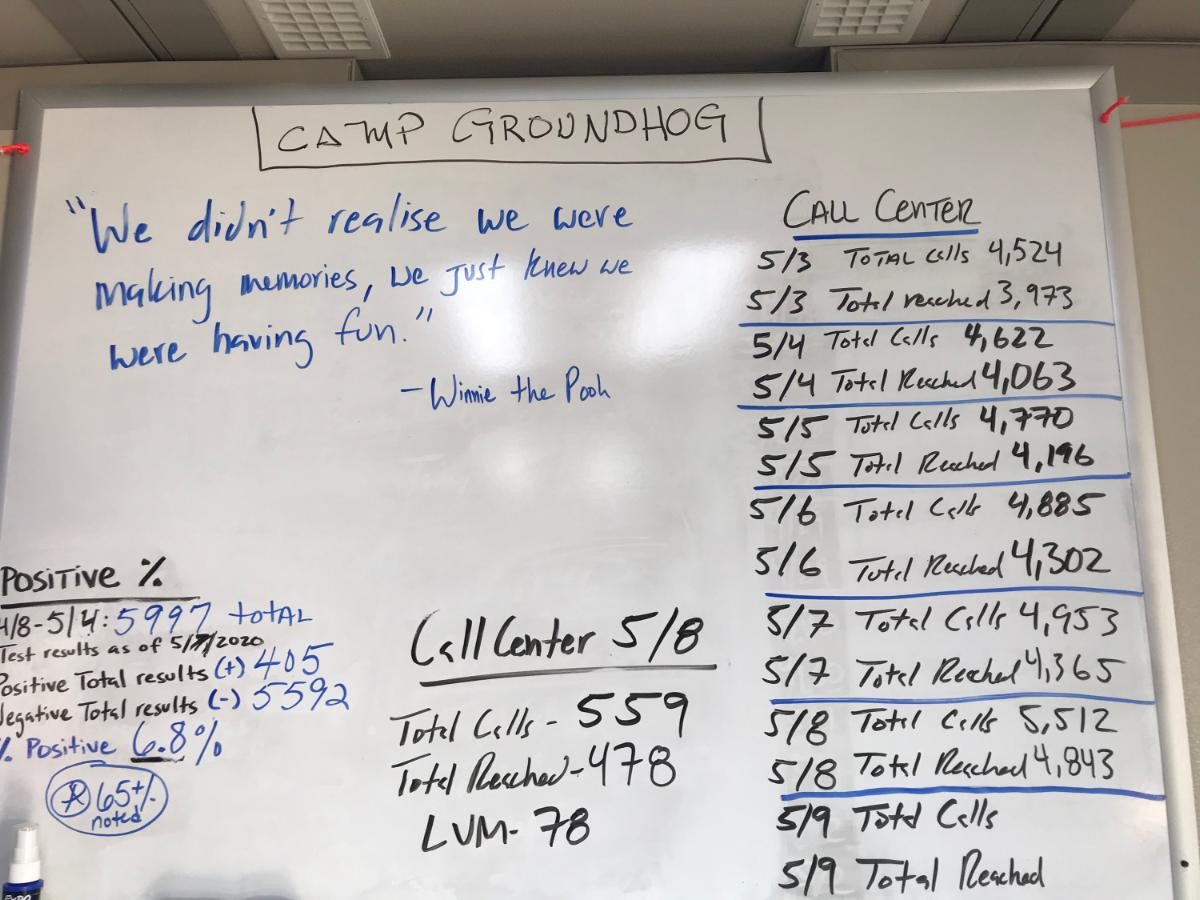 One of the students who works in the call center, Samia Akkouche, who graduates with a MSN in July, praises the leadership skills displayed by Dr. Gordon. She went on to reflect that the university showed an “enormous involvement” in the community, something to be proud of.

“I see the highest achievement of all time as reaching the level to give back to the community in a time of need. FIU taught me and many students like me to make some time in this busy modern life to enjoy giving without expecting.” 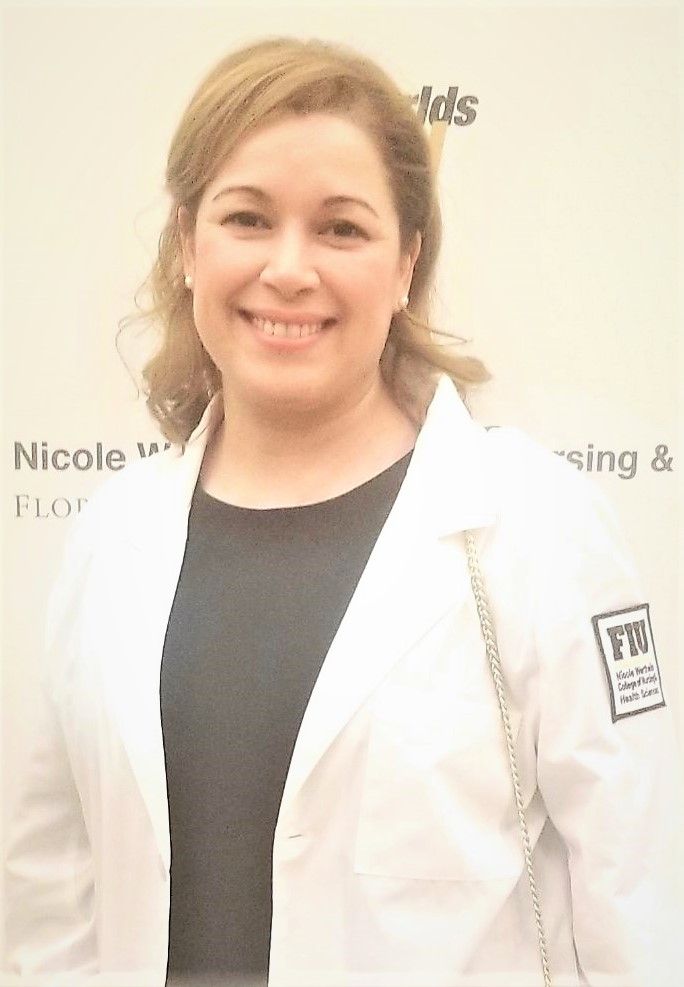 All-in-all, what I have shared with you on this Mother’s Day is neither glamorous nor glitzy. It is not exactly the stuff that US News and World Report rankings are made of. Yet if it weren’t for these volunteers and countless others like them at other test sites, and their willingness to take the risk of exposing themselves to COVID-19, we would be nowhere in testing.

True, we may be on the cusp of a do-it-yourself test that minimizes risk to third parties. In the meantime, however, we have taken responsibility in a manner consistent with our mission, and consistent with our passion to help uplift our community. We have also helped to lighten a burden of thousands if not millions of fellow human beings who just want to get on with their lives and free themselves of the COVID-19 weight, something, under the best of circumstances, that will be difficult in the next months.

It would be easier and safer to do nothing, to risk nothing, and sit back and wait for the “coast to be clear.” But we are blessed with brave people who want to do right by our community. To paraphrase St. Thomas Aquinas, “if the highest aim of a captain were to preserve her ship, she would keep it in port forever.” As you should know by now, our ship was built (to borrow from Bolivar) to “plow the seas,” as we seek our next horizon. Our journey is real. There may be detours small and large, but our brave community and faculty and staff at FIU believe that our “post of honor” is worth defending and enlarging, as a means by which to keep hope and opportunity alive and well for the legions of learners and their families who depend on us.

Have a Happy Mother’s Day!
In the Panther spirit,