If you have not felt some stress lately, you have an uncanny ability to glide above or below the fast-moving social and political forces that are cascading throughout our lives. Most universities, in response, are now grappling with unprecedented demand from students for counseling and psychological services. Our FIU is no exception.

We see and feel daily reminders of the stresses and strains that impact our ability to foster student and learner success. Daniel Goleman, an expert on emotional intelligence, reminds us that “academic intelligence offers virtually no preparation for the turmoil — or opportunity— life’s vicissitudes brings.”

Talk to specialists about this. You will end up with varied interpretations. On one hand, some will explain a surge in demand for services as a characteristic of a newer generation of students, Gen Z, who are not so quick to stigmatize mental health challenges. They will explain that gatekeeper training, increasing self-help behavior, and greater awareness of treatment options are driving the surge in demand.

Remember that popular and highly visible entertainers such as Selena Gomez and Lady Gaga have spoken out about their mental health struggles. Lady Gaga has openly discussed her situation including accompanying PTSD and chronic pain and she has waged a personal war against the stigma of mental health treatment. 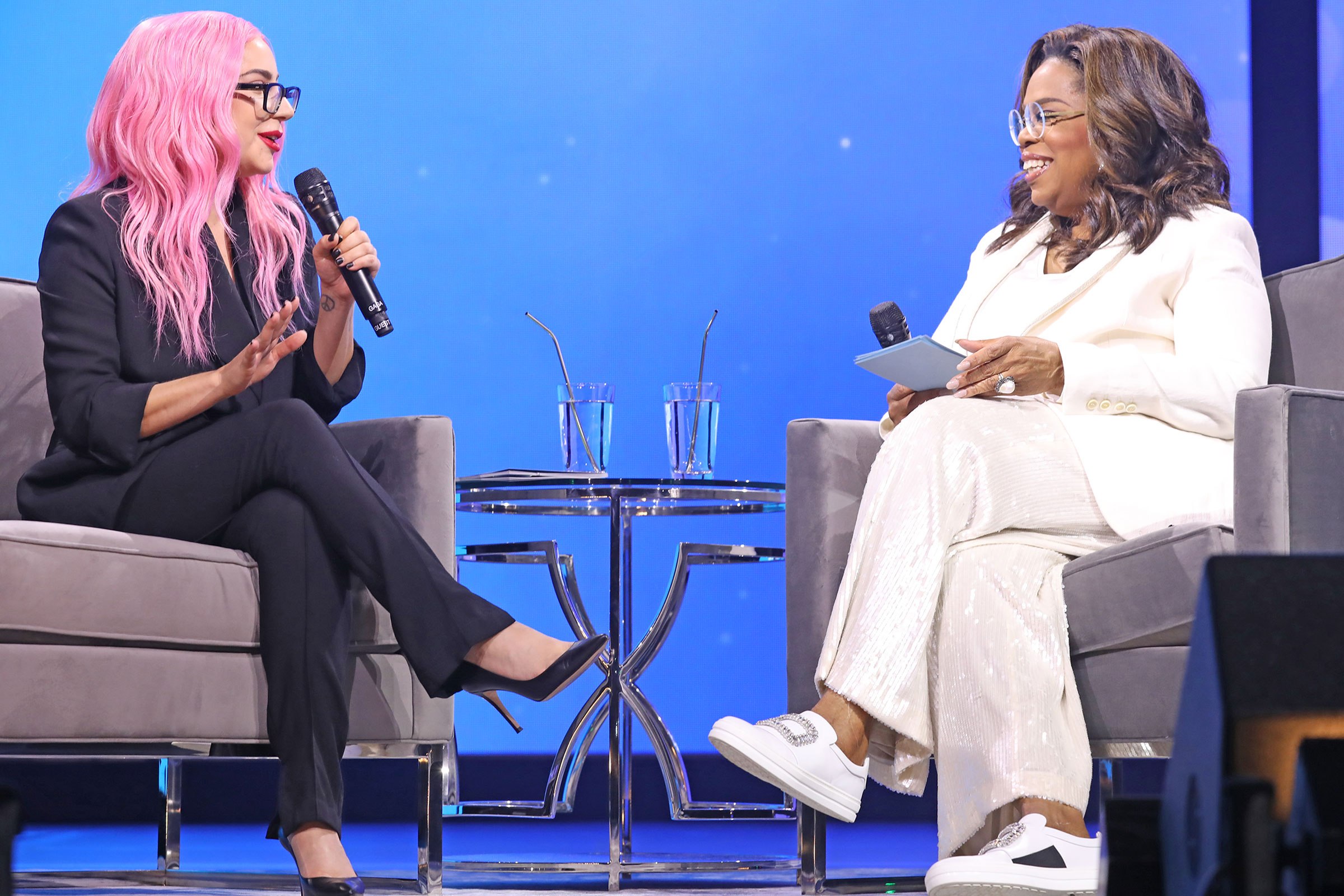 But facts are facts — others will point out and with good reason. Recent studies (Journal of Adolescent Psychology) report that serious mental health issues – severe depression, self harm behavior, and suicidal thinking – doubled between 2007 and 2018. The journal Psychology Today reports that while 31% of students surveyed felt debilitating depression in 2009, that percent had grown to 42% by 2018. Likewise suicidal ideation had doubled from 6% in 2009 to 12% in 2018.

How we explain this surge (e.g. social media, cell phones, sleep deprivation) is important to the proactive behavior necessary to help so many who are suffering. In the meantime, action must be taken. New and innovative interventions are necessary.

Meet Kiwi, FIU’s unique green alien – and the official spokesperson of FIU’s Counseling and Psychological Services (CAPS). You see, college can often pose significant stressors on the lives of our students, often making them feel a little bit like aliens. And Kiwi, an alien by birth, understands these struggles and serves as an opportune liaison between our students and CAPS. 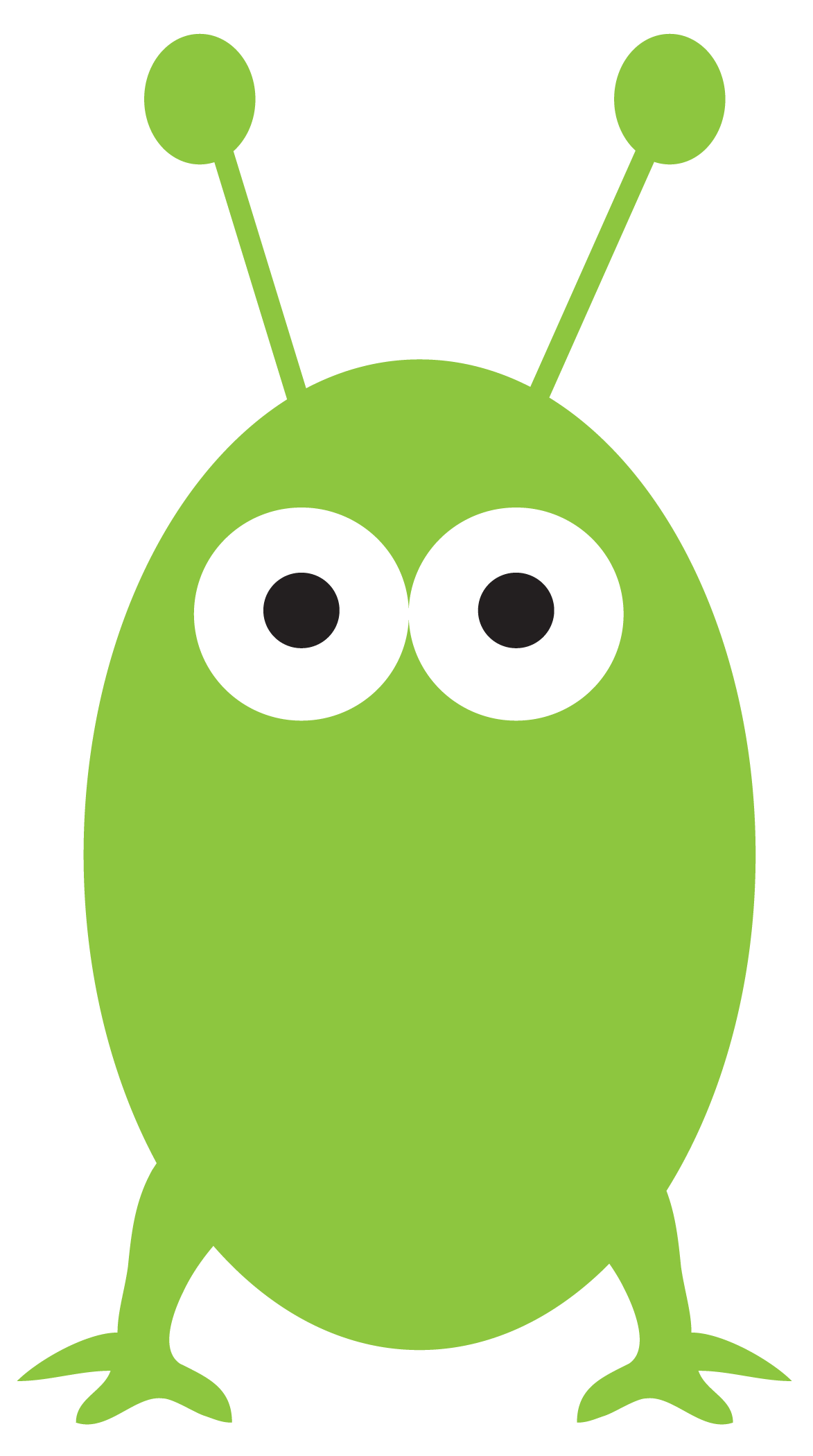 Kiwi is a reminder to students that they are not alone. Whether you’re dealing with anxiety, depression, an eating disorder, substance abuse or sexual assault, CAPS and FIU’s Victim Empowerment Program are here to help. Services are always free and always confidential.

“As a new Freshman starting at FIU, I definitely felt like an outcast. Learning about Kiwi the Alien and what it symbolizes really resonated with me. Kiwi is an alien because college can make you feel like an alien,” said Saborio, an executive assistant for the FIU Nursing Class of 2020 and a lead peer educator and social media specialist at CAPS.

Coming to a new school, without any friends, she felt she needed to find her place within FIU. And because of Kiwi, she applied to become a peer educator for Kiwi’s academy. Eventually, as a social media specialist at CAPS, Saborio said she realized how impactful Kiwi can be in the lives of our students.

“Students love taking pictures with the Kiwi mascot when we walk around campus. They are eager to share their pictures and be featured on our social media,” she said, adding that everyone on campus is always trying to get their hands on Kiwi merchandise.

“I believe this popularity with Kiwi the Alien is because it is a diverse, nondiscriminatory, relevant icon,” she added.

Kiwi was created after Wendy X. Ordonez, Outreach and Educational Media Manager at CAPS, was tasked with letting people know about the Counseling Center six years ago.

“I wanted something that everyone could identify with in order to make the topic of mental health more approachable,” she said.

The tag line for the campaign was created during a brainstorming session, and then Wendy illustrated Kiwi for the first time on a bookmark. Green was chosen intentionally, Wendy added, to eliminate any reference to skin color. In addition, using an alien would be easy to understand and would not restrict the campaign to any specific gender expression.

Now, Kiwi is part of FIU’s larger campaign: “College Can Make you Feel Like an Alien, and CAPS can help you adjust to the Panther Galaxy,” most times shortened to “College Can Make you Feel Like an Alien.” Like Saborio, Wendy believes the simplicity of the concept is one of its most effective components. “Feeling like an alien” is often used to describe sentiments such as loneliness, the very common fear of not-belonging and the feeling of being a stranger in unknown territory. A quick Google search shows hundreds of results about a college student’s experience or just human existence in general.

Kiwi, in particular, is focused on helping our FIU student population, which faces unique challenges: it is comprised of first-generation students, international students and it is more diverse than many of the institutions in the nation. Kiwi embodies all of those ideas, and via a friendly mascot our FIU is depicting mental health in a more positive light. 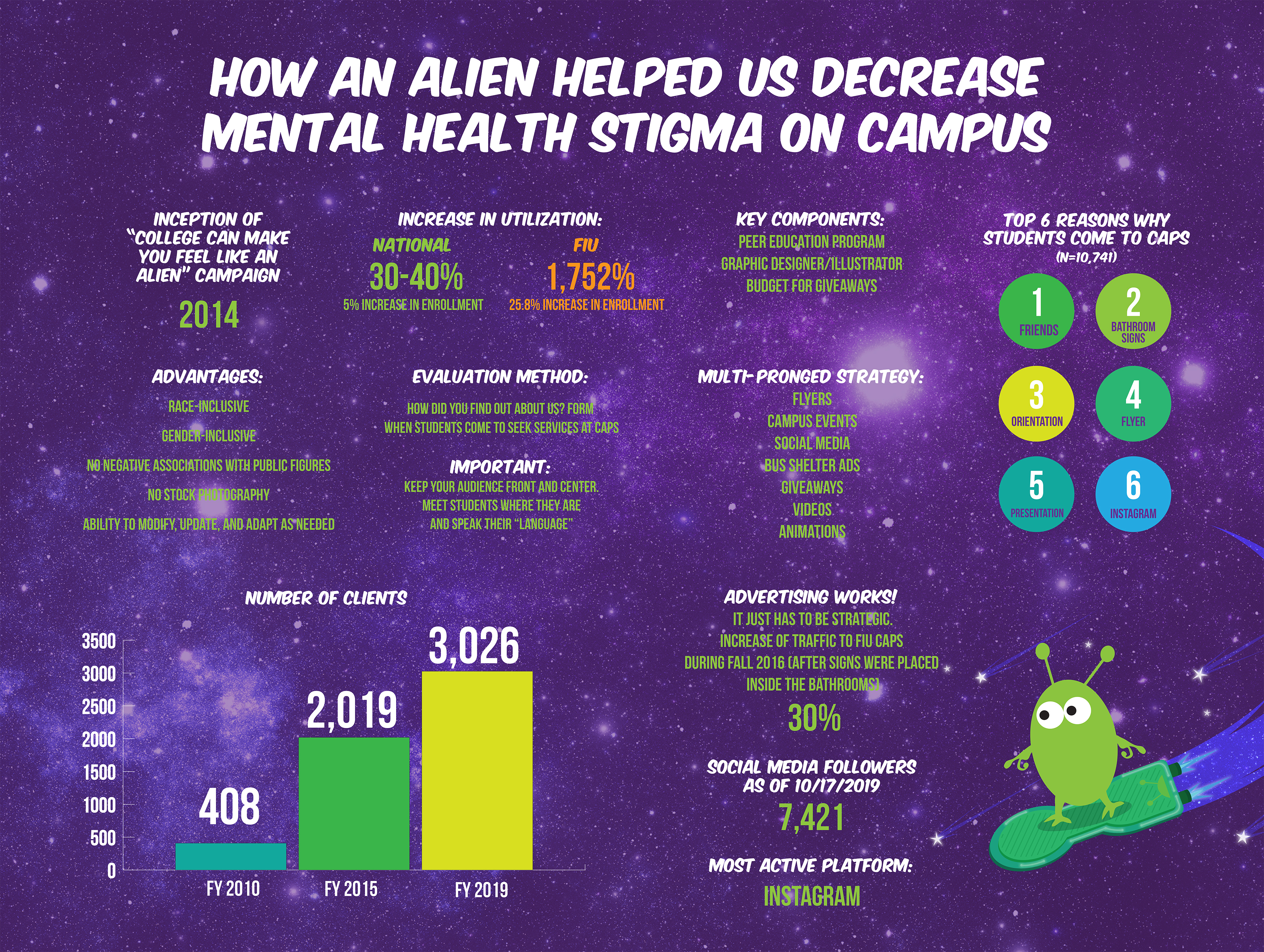 And it’s working. Since Kiwi’s arrival on campus, demand for CAPS services has increased by 79%. In addition, the Kiwi campaign is credited with bringing the CAPS program from being one of the least-recognized services to the #1 most recognized service on campus among those supported by the university health fee, according to a survey conducted in 2018.In addition, advertising CAPS and VEP services in campus bathrooms increased traffic to CAPS by 33% during the Fall semester, after being installed. They remain one of the top three reasons why students find out about CAPS services. 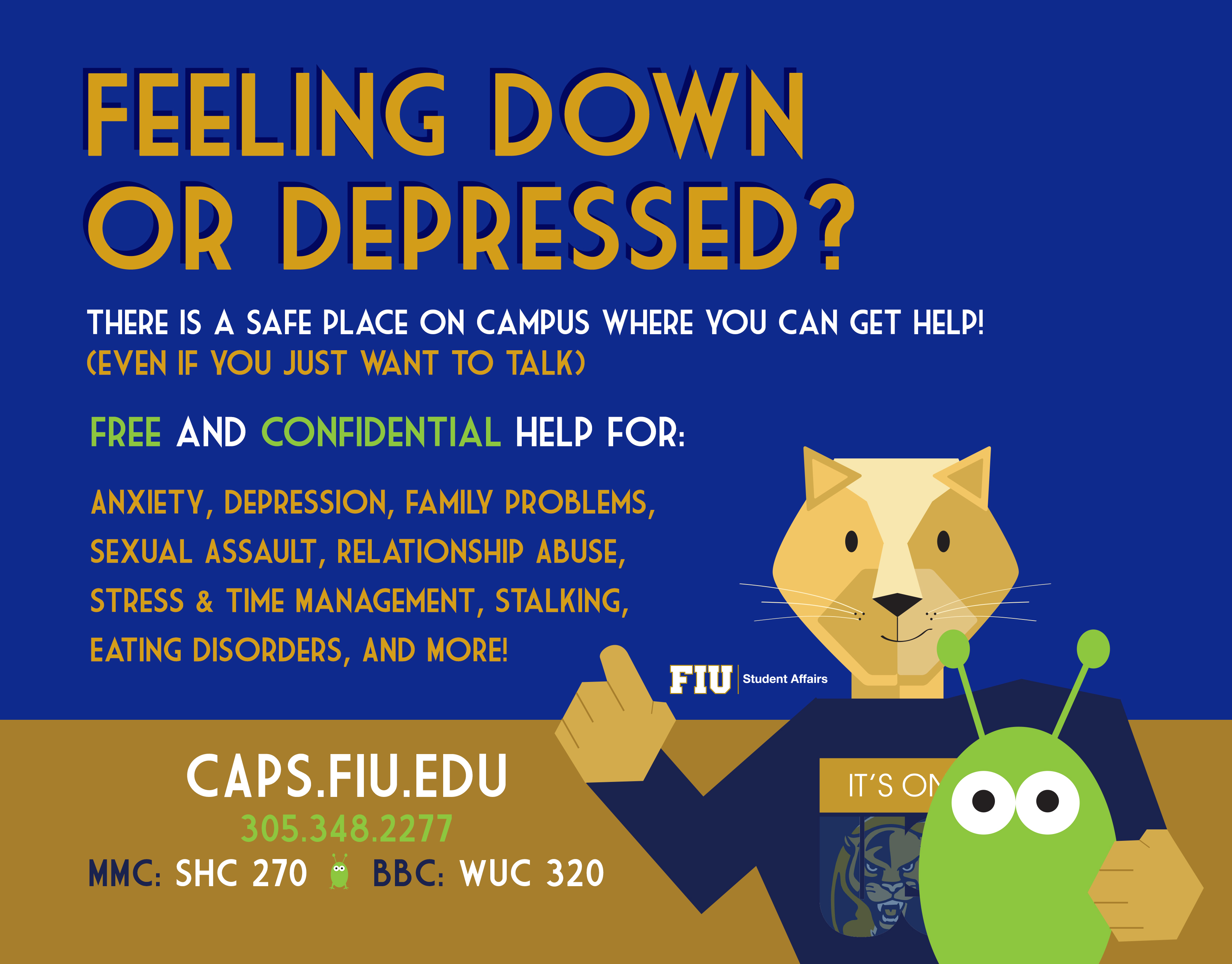 So don’t let Kiwi’s bright green hue and friendly demeanor fool you. This special member of the FIU family plays a critical role in the health and well-being of our students. Hope you’ll meet Kiwi some day.

We’ve got to find a way to help those in needs. Kiwi is just one of the many innovative approaches that are helping to make a difference.