Immediately upon learning that I had been offered a job in April 1976 in political science at a place called Florida International University, I called my father to let him know that I had a real job.

He was happy for me and undoubtedly relieved that I would soon be off his payroll. He congratulated me. Then there was a short pause—”Where?” I repeated, “Florida International University in Miami.” There was a longer pause. He then asked if FIU had a football team. It was my turn to pause. I knew the answer was no, but somehow could not force myself to answer the question; so I blurted out—”Dad, it’s a real job, and there are good people at FIU.”

Knowing what I know now, if I had to do it over again, I would say: “Dad, it’s a real job, there are good people at FIU, and the best ‘cafecito Cubano’ anywhere.” 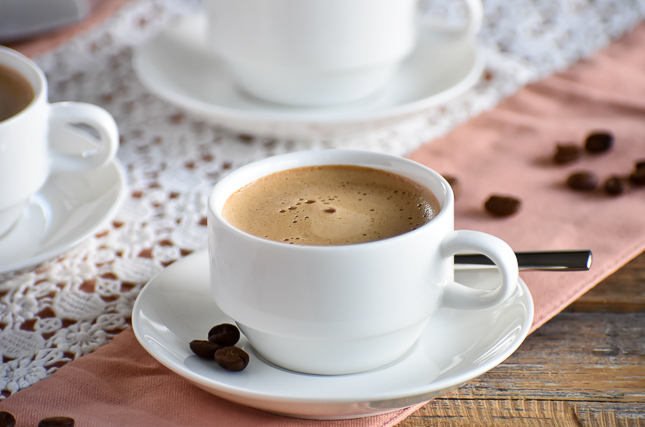 Indeed, like many first-time residents in Miami who have moved from somewhere else, there is a lot to learn about Cuban culture and the Latin vibe in Miami. Even though I’ve lived in six Latin American countries and spent hours and hours in cultural study there, nothing could prepare me for the full range of cultural challenges embedded in the 305. And I am better for these decades of experience here in Miami.
As I developed friends, mentors and coaches within the continuously expanding Cuban American community in Miami and at FIU, I began to see multiple facets of the local cultural ecosystem that gave me added appreciation, delight and sensibility about the human condition.
One thing is clear to me now that wasn’t so clear then: Our community runs, in part, on the high octane fuel known as Cuban coffee. And one of the main platforms for this fuel is “la ventanita”—an iteration of ventana, which means window in Spanish. Let me explain. 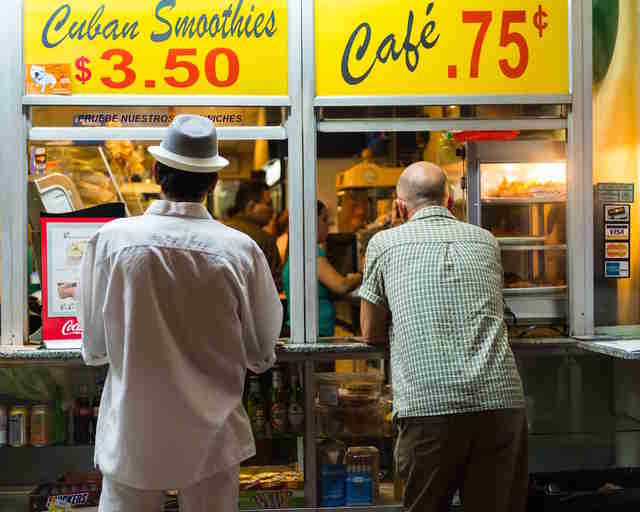 FIU professor and friend Raul Moncarz introduced me to “la ventanita”—the modest, open window at most coffee shops and restaurants in Miami, where you can fraternize with friends, sip some cafecito, get caught up on the latest gossip about someone’s tio, or, say the mayor of city “X”.

La ventanita we frequented was in Sweetwater and normally featured a grimy yellow construction water cooler that refreshed our throats with ice water after the sweet coffee was consumed. La ventanita was a fascinating place, a platform for social leveling, featuring male and female customers from all walks of life—a pause in their respective hectic lives to enjoy the simple pleasures of their camaraderie, where the lady barista was a unique power controlling access to the sugar and other pastry goodies that might accompany the café, and the shoulder-to-shoulder sharing of a moment in time to enjoy one of life’s small but necessary pleasures—the cafecito.

How important is la ventanita? On any major event in our community or in Cuba, la ventanita is the key gathering place, the “definitive” source of information and the place to get comfort or join in solidarity with like-minded or kindred spirits.

Two ventanitas, in particular, stand out as community pivot points during periods of big news: la ventanita at Versailles on Calle Ocho and la ventanita at La Carreta on Bird Road in Westchester. Check out the multigenerational mix of people who cluster there on special occasions: pundits, rabble rousers, politicians, philosopher kings and queens. Then, when the media arrives, the real carnival of life begins. La ventanita is truly a unique happening in Miami, particularly in periods of political stress and difficulty. 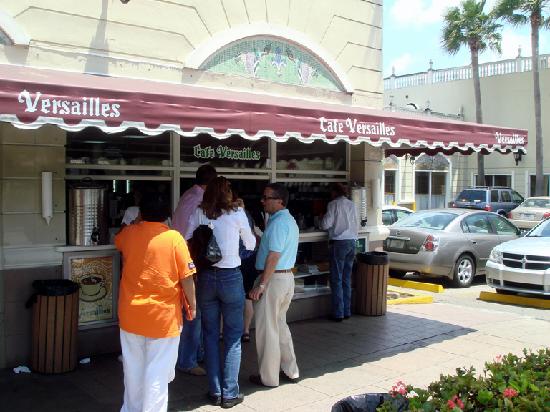 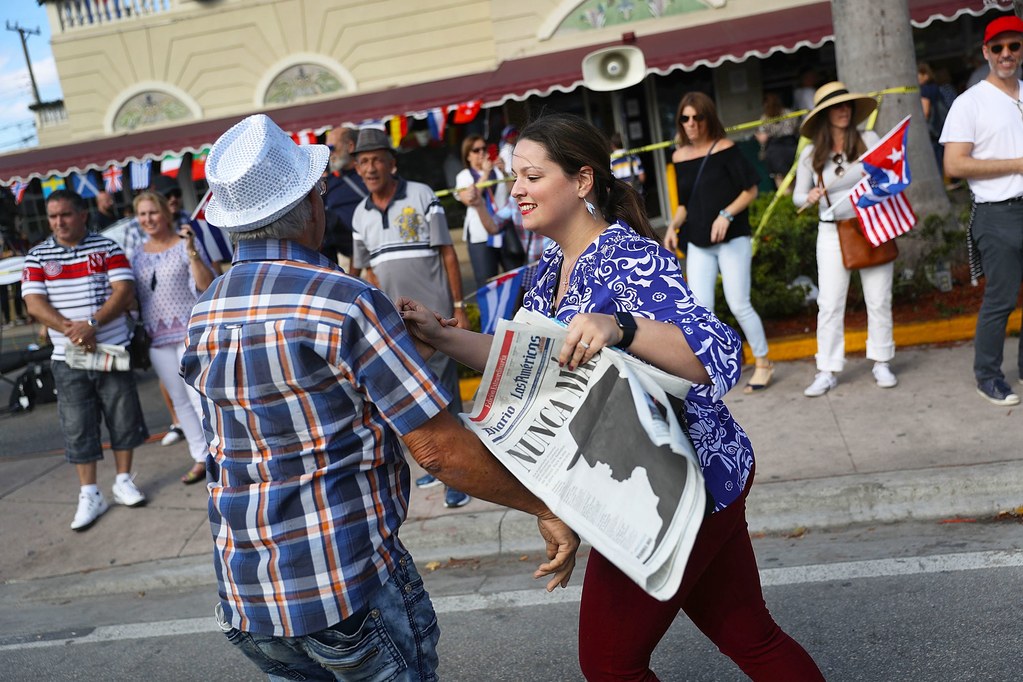 After the death of Fidel Castro, a celebration erupted outside of Versailles. 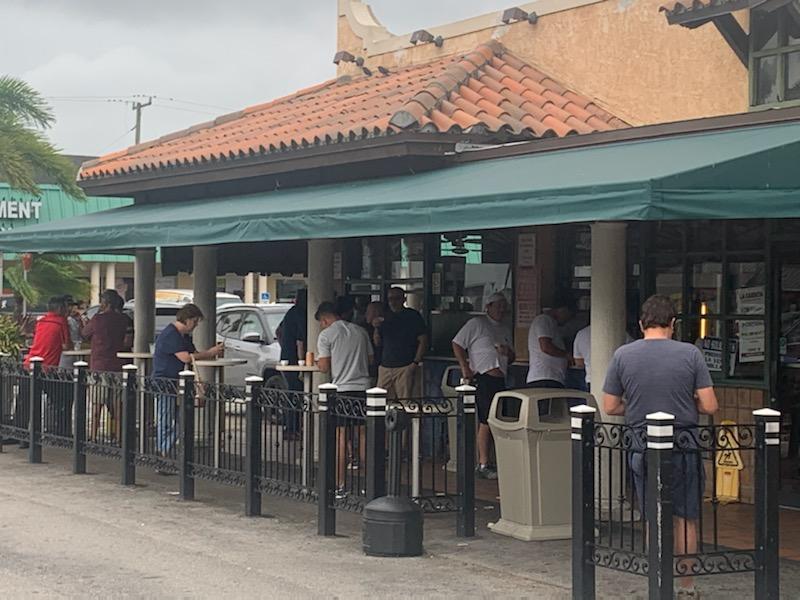 My friend Lisandro Perez, one of the premier chroniclers of Cuban life here and in Cuba, often reminds me about the more subtle aspects of Cuban culture and the café Cubano. (He also has some unique views on flan, but I will leave these for another moment.) When he directed the Cuban Research Institute (CRI) and I the Latin American and Caribbean Center (LACC) at FIU during the 1980s and 90s, we shared common and very cramped space that was ground zero for the blending/clashing of Anglo and Cuban American culture.

While we did not have a ventanita, per se, we had the equivalent—a very small walk-in closet that doubled as a kitchen/hang out for staff, faculty and anyone else who could fit in the 7-by-10 space. It was outfitted with a refrigerator, a hot plate and a microwave and what seemed like a dozen or so different types of coffee makers, each suited to the particular needs/appetites/customs of the two dozen occupants of the warren (then and now) in DM 237, known as LACC/CRI.
It was there that I learned what I had earlier sensed at la ventanita— not all coffee was created equal. Listen to Lisandro’s riff on this:
What is critical is not the drinking of the café, per se, but the occasion of making it and sharing it. Drinking is done in an instant. Café cubano is not nursed. It is swigged, like a shot of liquor or a medicine. The social context of the activity can be found in the offering, the making, the sharing, the serving. It is a social gesture. It is what you are expected to offer someone who visits you at your home, at your office.

Because the café is offered and taken fresh, the offering is centered on the act of colar. The café hardware, whether it is an electric espresso maker, the over-the-range Bialetti, or even the old conical cloth—the latter one involving actual action of colar—they all make a greater quantity of café than what one person can drink. So it is selfish and wasteful not to share….

The origin of the LACC/CRI café custom is rooted precisely in the communal nature of colar. I wanted my cafecito after lunch, so I took an electric café maker to the kitchen. For me to have made a batch, silently, and not have shared the colada but left the surplus to get cold or thrown it out would have been extremely selfish and, worse, antisocial. Instead, I purchased the little plastic cups, announced when I was making it and passed around the filled cups. We did not sit around and drink it together. What is shared is not the drinking but the sharing itself. This is very different than if I were percolating American coffee, served myself a cup and left the rest warming on the coffeemaker. That would have been perfectly ok. You don’t announce you are percolating American coffee. People come around at their leisure and serve themselves. That is not a social occasion. 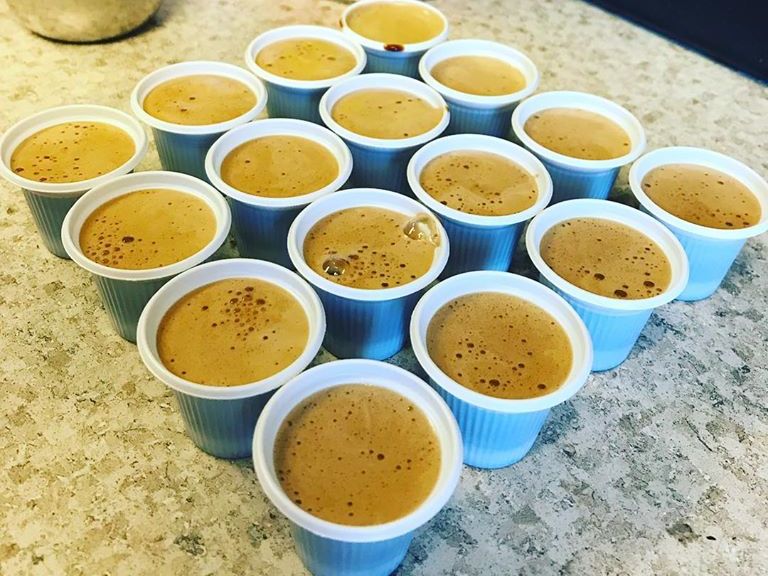 Drive around Miami. You can see people drinking cafecitos at ventanitas everywhere—on every street corner. They are as common and natural to our cultural ecosystem as churches and mosques are to the religious scene of the modern world, as streetlights are to the modern urban center.

But we have been slow to catch on at FIU! Sure, we have a Bustelo, Vicky Café (with a very modest window) and Starbucks coffee shops. And we feature cafecitos at 3:05 at our Washington Center (440 First Street NW on Capitol Hill) and even our researchers enjoy it while conducting research in Alaska. But we have not captured the natural vibe of Miami through actual ventanitas that beckon one to pause and grab a cortadito on the way to class or a meeting. 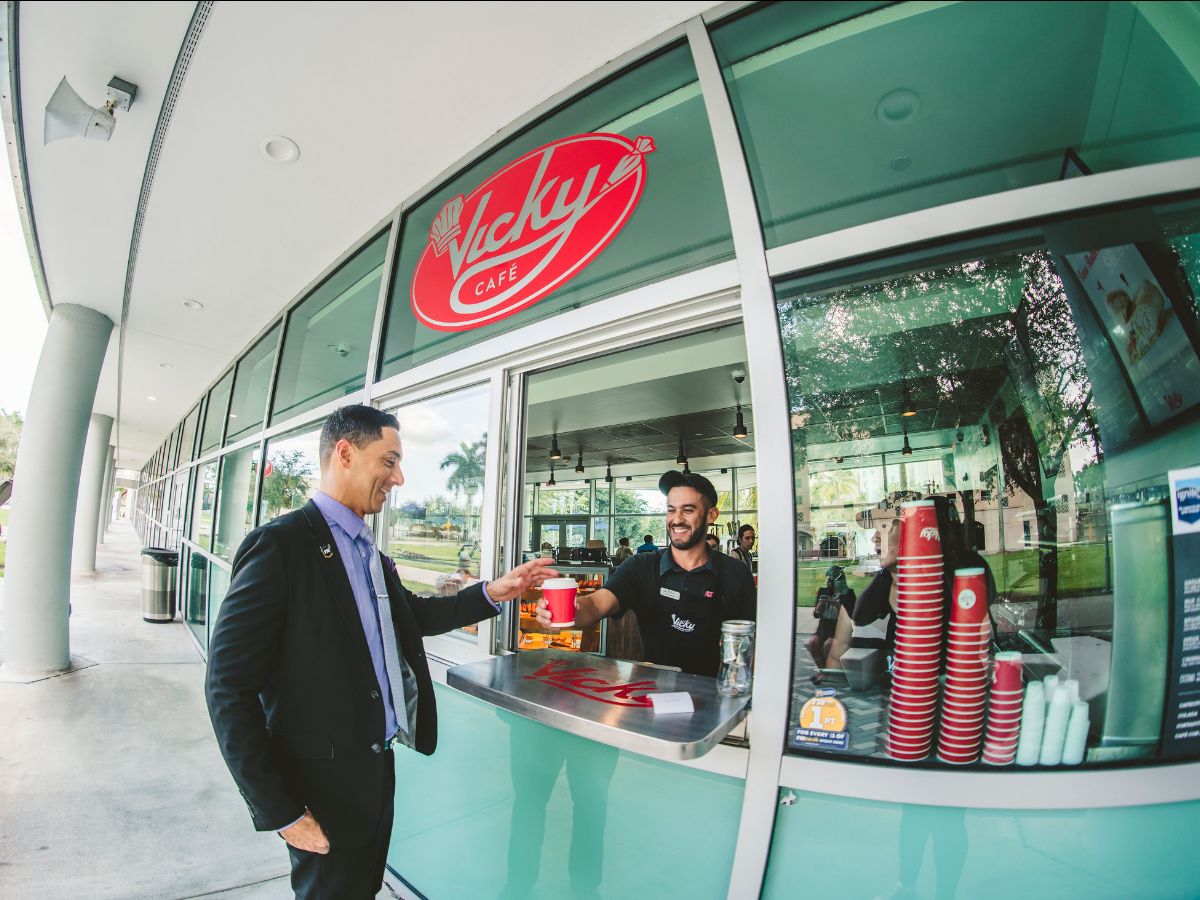 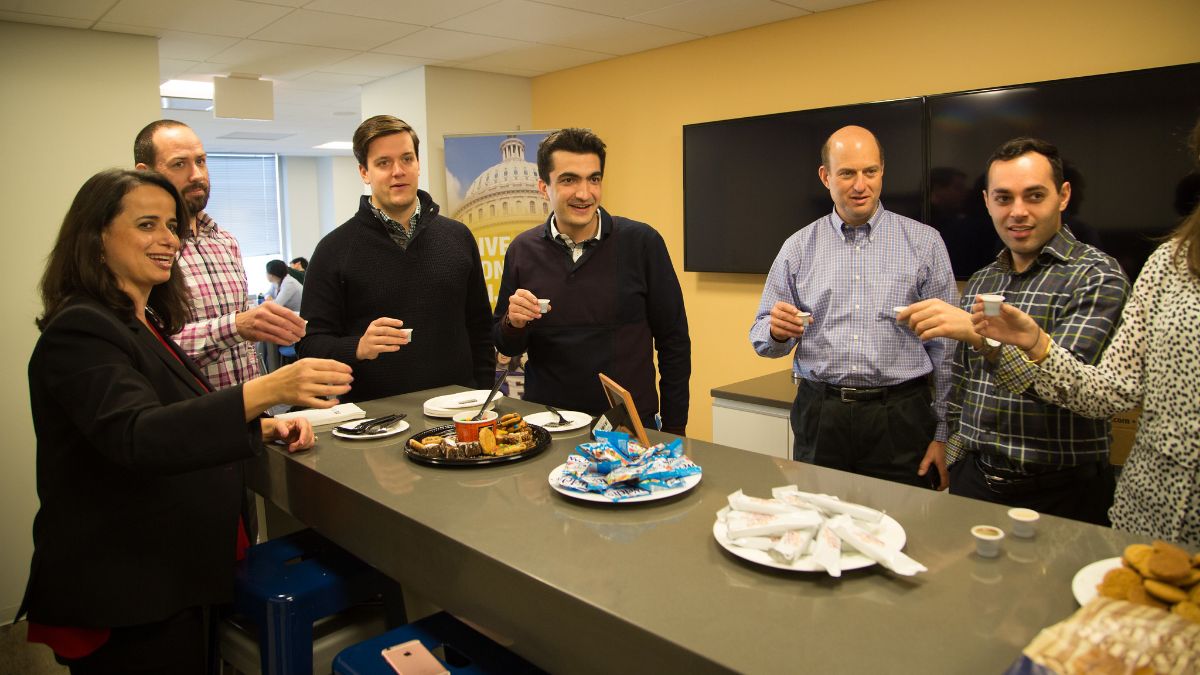 This is even more important these days as we learn that the experience economy is real. As McKinsey & Company points out: “In recent years, faced with the choice of buying a trendy designer jacket or a shiny new appliance or of attending a show, consumers increasingly opt for the show and more broadly for experiences with their friends and families.”

They go on: “Consumers of all ages are opting for experiences, with millennials leading the charge.” And finally, McKinsey asserts that shared experiences with friends and family have a deeper psychological link to long term intrinsic happiness than buying products does. 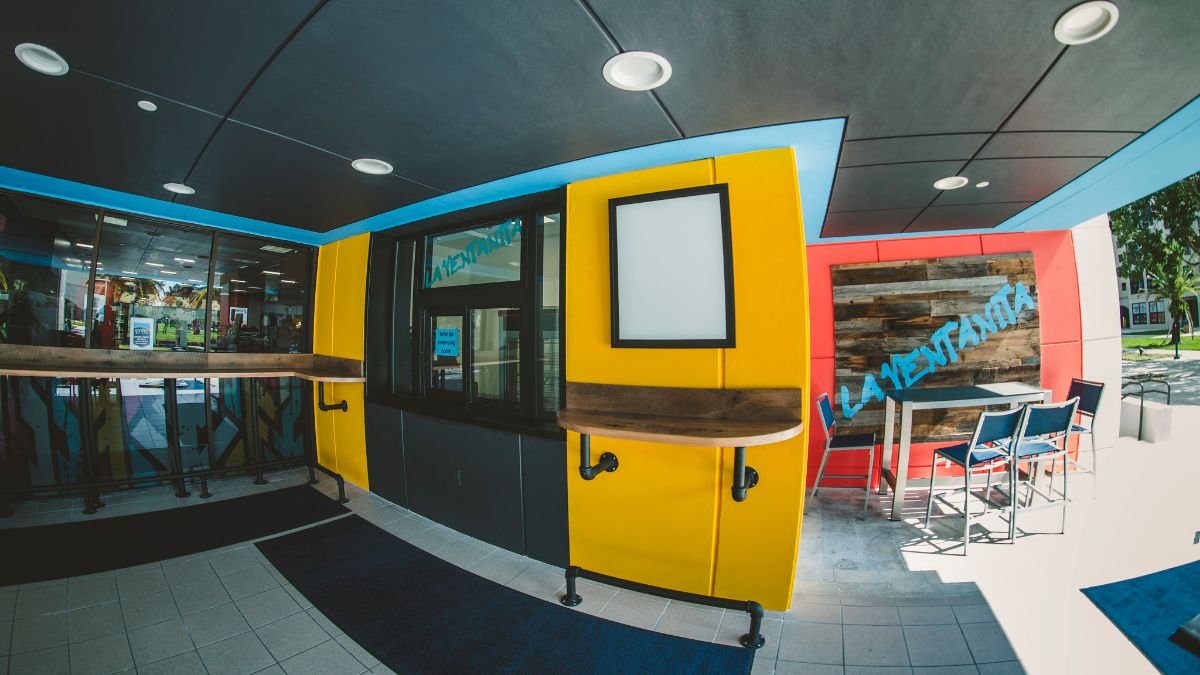 Which brings me back to me. Yes, I come out of a rich euro-centric Jewish heritage and have some midwestern traits that may be unmistakable. But 40 years in this incredible community should qualify me as un americano aplatanao. And my nearly obsessive interest in building La Ventanita at the major entrance to the busiest building on campus should actually remove any doubt about how deep we are willing to go at FIU to capture the unique experience that is our community and our Miami!